Finn and the Swirly Spin is a 5-reel slot designed by NetEnt that comes with spiraling reels and Avalanche Feature. The game borrows an Irish theme featuring the folklore character Finn. Besides a charming storyline and attractive graphics, the game has an unmatched Free Spins round with loads of features. The low-to-medium variance game offers low-risk spins and multiple bet settings. Also, it has an Finn and the Swirly Spin RTP of 96.62%.

Play Finn and the Swirly Spin Slot Demo for Free (18+)

Where can I play Finn and the Swirly Spin with a big welcome bonus?

Below we select the best certified and licensed slot sites where you can play Finn and the Swirly Spin. Select the welcome bonus which suits you best!

2
First deposit bonus
80 Free Spins on Book of Dead
Only available for first time depositors. Min deposit £10. 50 Free Spins on Book of Dead. Spin Value: £0.10. After your first deposit you may claim your 30 Extra Free Spins by visiting Kicker Section. No min withdrawal. Offer cannot be used in conjunction with any other offer. Only available for specific players that have been selected by PlayOJO. OJO’s Rewards and Game Play policy applies. 18+| BeGambleAware|Full T&Cs Apply
100 games
4.8 rating
4.8
Claim Read More

Basic Slot Details of Finn and the Swirly Spin

A Brief Overview of Finn and the Swirly Spin Online Slot

Finn and the Swirly Spin is a fascinating NetEnt slot game that works differently. The title has a beautiful theme and enchanting graphics but the most striking feature is none other than the swirling reels.  NetEnt has always acquired fame for developing revolutionary gaming content and trendsetting slot machines. Introduced in 2017, the game Finn and the Swirly Spin is yet another popular release by the provider that offers extraordinary features, lots of fun-filled bonuses, and high-paying rounds with guaranteed wins.

The slot machine has a 5×5 grid instead of the usual spinning reels. Within the grid, the symbols move spirally and swirl towards the center of the grid. Adjacent symbols that form winning combinations burst into thin air and are replaced by new symbols that avalanche into their place. The game has numerous rewarding elements such as Sticky Wilds, Irish Luck, and Starfall Wilds. Also, it has different types of Free Spins that shower prizes. You can enjoy this exciting game on your mobile, tablet, or desktop. You can find the game along with its fun version at NetEnt casinos and gambling sites that offer NetEnt gaming content.

Finn and the Swirly Spin Video Slot: Theme and Storyline

Finn and the Swirly Spin feature a captivating Irish theme. Although there are several Irish-themed slots in the market, this NetEnt title is different. It features the Irish folklore character Finn, a magical being. As per Irish mythology, Finn is a generous giant who plays his magical flute. The theme gets richer with lucky Irish symbols such as the 4-leaf clover and lucky horseshoe. The storyline revolves around Finn who helps the player to get the golden key and unlock the World of Magic. Finn flies along and the player discovers a magical world of luck and riches hidden behind the clouds. There are many stories and fables surrounding the character Finn. But the way the game has presented him makes the theme highly imaginative and thought-provoking.

Finn and the Swirly Spin is a vivid NetEnt title that rightfully boasts about excellent graphics and animation. The visuals in the game have a movie-like quality and they can draw anyone into the slot machine and tempt them to explore the magical swirling world of Finn. The game shows Finn sitting on a hilltop and playing his flute as the trees and grass in the surrounding sways in the breeze. Beautiful meadows, fireflies, rolling hills, a rainbow, and the blue sky with clouds floating around make the entire scene look quite charming. The reels are made of rocks with jagged edges and they shift around to reveal new symbols.

The game’s character, background, and symbols are caricatured to evoke a fun-filled atmosphere. The Free Spins round offers a display of beautiful graphics as the game ushers the player into a magical world. Crisp 3D graphics and funny animations are used to represent all the major aspects of the game such as mega wins, Random Features, special symbols, and various types of Free Spins. Players who like games with great themes and graphics would definitely enjoy this slot.

The soundtrack is fully engaging and breathes life into the graphics and animation. The Finn’s flute plays a seductive tune that can keep you mesmerized throughout the session. The music becomes more dramatic and high-pitched as the winning combinations bring the Key symbol closer to the center.

Finn and the Swirly Spin is a sophisticated slot that has 5 reels with symbols moving in a spiral pattern. There are 9 symbols altogether and this includes 6 normal symbols and 3 special symbols which are the Free Spins Key, Wild, and Sticky Wild. Wins occur when 3 or more identical symbols occur consecutively in a line either horizontally or vertically. The game has Random Features that occur during normal spins as well as Free Spins with special features

The game has a bright yellow star as the Wild symbol with some extra features. The symbol substitutes for all the symbols except the Key Symbol. Whenever a win involving a Wild occurs all the winning symbols, as well as the symbols that lie adjacent to the Wild (horizontally and vertically), are destroyed. This gives space for more new symbols. And if wins occur without a Wild symbol a new Wild appears after the winning symbols are destroyed.

The game has 4 Random Features. These features can be triggered randomly during the base game. Also, they are available during various types of Free Spins round. Listed below are the 4 Random Features,

The feature drops 2 or more Wild symbols on the reels after the reels come to a halt. These Wilds can fall anywhere and if none of them triggers a win, a new Wild symbol is placed and this continues until a win occurs.

The feature may occur on any spin that doesn’t trigger a win. The feature randomly sets a certain number of symbols on fire and destroys them. The new symbols that take their place trigger a guaranteed win.

The feature can occur randomly on any spin that doesn’t trigger a win. The feature replaces a vertical or horizontal line of random symbols with a line of identical symbols. This generates multiple winning combinations.

The feature simply transforms all the heart symbols and spade symbols into different sets of identical symbols.

What different kind of Free Spins does this online slot offer? 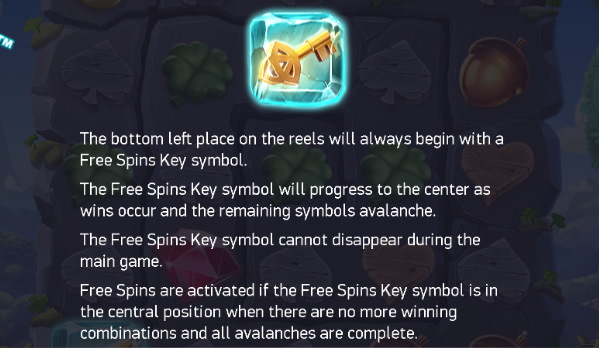 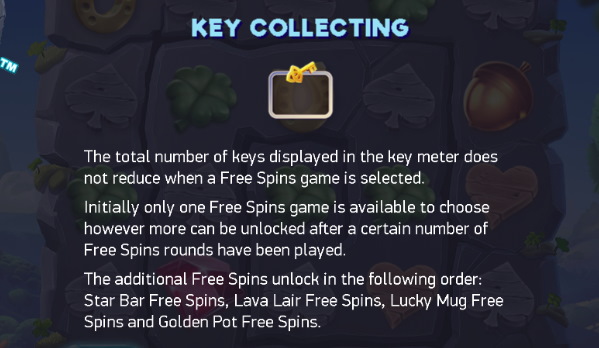 The Lava Lair Free Spins round is triggered when the player collects 4 Key symbols.  The round offers 3 Free Spins with the random feature, Dragon Destroy. In this feature, a Sticky Wild appears on the 1st reel during each spin. The Sticky Wild substitutes for all the symbols except the key symbol. It can form winning combinations but remains intact while other symbols in the combination burst away. Wins involving the Sticky Wild do not destroy all the symbols adjacent to the Wild. Further, in this round, a dragon appears and blows fire to set ablaze and destroy a group of symbols. New symbols swirl in to fill the space and this triggers multiple winning combinations.

When the player achieves a collection of 9 Key symbols it unlocks the Lucky Mug Free Spins round. The round has 4 spins and comes with the random feature of Irish Luck. As per the feature, all the symbols in a row or column transform into an identical symbol. The feature repeats on each free spin and the player enjoys multiple wins throughout the round.

The Golden Pot Free Spins is the highest paying round that rewards thousands of coins. When the player collects all the 16 Key symbols, it unlocks the Golden Pot Free Spins round. There are only 2 Free Spins in this round but the Magic Transform feature helps players in winning high payouts from these spins. The feature transforms all the heart and spade symbols into high paying symbols. All the spade symbols convert to a chosen symbol and all the heart symbols convert to another chosen symbol. This triggers multiple winning combinations and back to back wins on a single spin.

What are the Finn and the Swirly Spin RTP & Variance?

The Finn and the Swirly Spin RTP is estimated at 96.62%. The game exhibits low-to-medium volatility spins. This rewards the player with a fairly good rate of wins. The game has 10 bet levels and players who bet on a higher level reap bigger returns. Likewise, the coin value selected also determines the extent of wins. The win in currency is calculated by multiplying the coin wins with the coin value. Hence, to enjoy bigger wins on a spin, you need to select a higher coin value. However, players are recommended to keep a close track of their total balance while placing high-value bets. Also, to enjoy the mega wins from the Free Spins feature one has to play long enough to collect all the Key symbols required for unlocking the bonus rounds.

The game has symbol payouts as big as 500 times the bet level. Hence, strategic players can win a decent level of returns throughout the session. But the real potential of the game lies in the Free Spins round that has multiple winning features offering guaranteed wins on every spin.

What symbols to look out for in the Finn and the Swirly Spin Paytable? 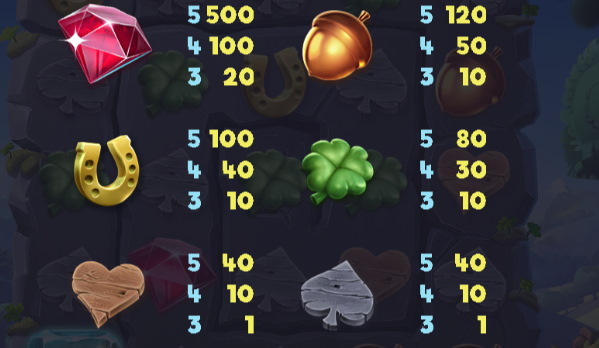 The Finn and the Swirly Spin Paytable lists all the symbol payouts starting from the highest-paying ruby symbol which has a multiplier value of 500 if 5 of it lands consecutively in a straight line. This is followed by the Golden Nut, Horseshoe, and 4-leaf Clover symbols. The heart and spade symbols are the low-paying ones.

Finn and the Swirly Spin Game: How to Win?

Final Verdict of Finn and the Swirly Spin

Finn and the Swirly Spin slot is a low-to-medium volatility casino game with a magical theme and impressive graphics. The character Finn plays an encouraging tune and rejoices whenever a big win occurs. Overall, it is one of the most entertaining slots by NetEnt that has an impressive RTP of 96.62%. The game offers numerous options to win mega rewards. However, players cannot expect huge wins right from the start. This is because the high-paying bonus rounds occur only when the player has collected the required number of Key symbols. Thus, you can conclude that it is a perfect game for low-risk gamers as well as high rollers.

Pros and Cons: Finn and the Swirly Spin

FAQs about Finn and the Swirly Spin

You can play Finn and the Swirly Spin slot at any online casino or gambling site that offers this NetEnt title.

2.    What is the Minimum Amount Required for Placing a Bet on Finn and the Swirly Spin?

Yes, you can play Finn and the Swirly Spin slot on any smartphone.

4.    Should I Sign Up as a Customer to Play The Free Version of Finn and The Swirly Spin?

No; most casino sites let the players enjoy the Free Play version without any registration or sign-up procedures.

5. What is the Finn and the swirly Spin RTP?

The Finn and the Swirly Spin RTP has been theoretically estimated at 96.62 percent. This is above-average. We at Play Real Money Slots always try to play online slots with an RTP of 96 percent or higher.

6. What does the Finn and the Swirly Spin Paytable look like?

There are 6 main symbols in the Finn and the Swirly Spin Paytable. From high to low they are: Diamond, Nut, Horse Shoe, Four Leave Clover, Hart Symbol & Spades Symbol. Furthermore there are a Sticky Wild and a Wild. The highest paying symbol, the Diamond, pays out 500 times for a 5x combination.

Try, The invisible Man, Rise of Maya or King of 3 Kingdoms.