Verdict on the Narcos Slot

Are you a Narcos fan? In other words, are you hooked to the biggest Netflix series by this name? If yes, then you will love this gift from the pioneer in the gaming industry, Net Entertainment.

The Narcos slot was launched in 2019 and is an inspiration from the Colombia of the 1970s and 80s when drug cartels ruled this South American country. This was the time when drug lord Pablo Escobar ran his empire across two continents which set off a multi-nation police action to nab and kill him. In this Narcos Slot Review we will discuss the Narcos Slot RTP, Narcos Slot Paytable, Look & Feel, Bonuses, and more!

Introduction to the Narcos Slot

Escobar was responsible for the death of thousands of police personnel and government officials. He himself met a violent death in 1993 after a shoot-out on the rooftop of his farmhouse in Medellin. While the Netflix web series tracks his life, it has inspired a slot game with guns, drugs, and money. Though one would expect blood and gory killings in this game, the developers have toned it down to give it a pleasing playing experience. Played over 243 paylines, this winner from Sweden based Net Entertainment has a Return to Player Percentage of 96.23, which is a fairly decent RTP for a slot game.

Like all Net Entertainment slot games, the Narcos slot does not disappoint. Inspired by the iconic web series strung around the life and times of the drug lord of Colombia, Pablo Escobar, this game easily sucks in players who love guns and cash. In addition, if you like chases and thrill, there is enough for you in this slot game. In other words, the Narcos slot has many features to make it stand out among the competition and lure in even the veterans of punting. There are the Walking Wilds, Free spin rounds, a Lock-up feature, and the Drive-in round to take you through the dark underbelly of the Escobar era in the world of drugs and money.

The developers have brought in a real-life feel to the slot game. Therefore, you will find all the characters of the web series along with the traditional symbols in this game. With a medium variance, the Narcos slot offers some exciting gameplay around well-crafted graphics and animations. In addition, it has the music to transport a player to the murky, dark world of drug lords, women, money, and the thrills which come with them.

Theme and Storyline of the Narcos Slot 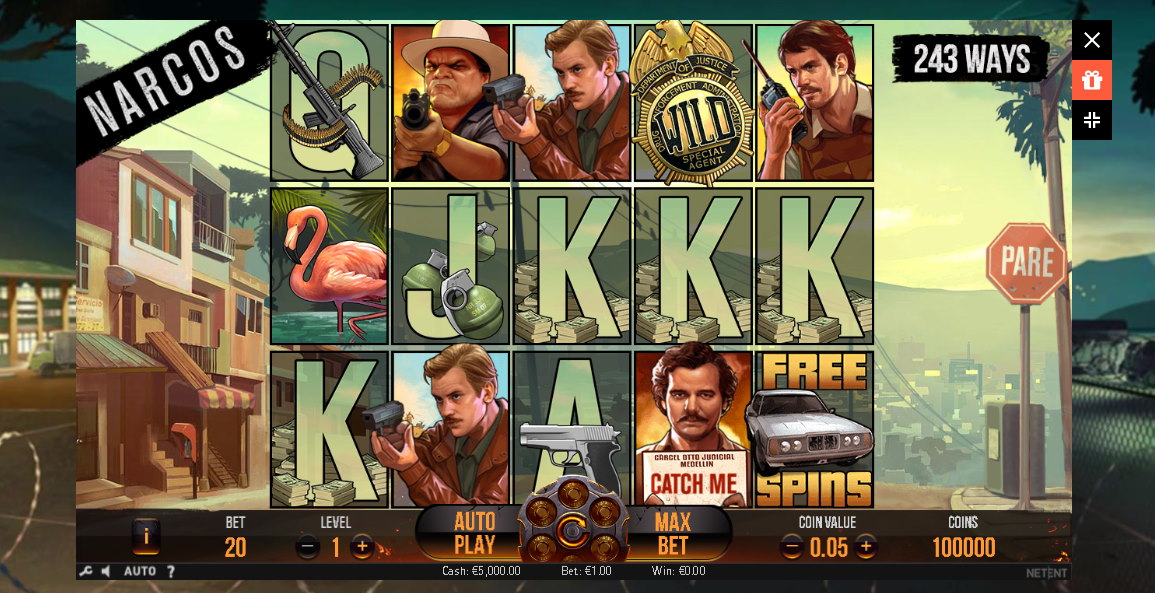 Needless to say, the Narcos slot is a crime-themed game. At the cost of sounding repetitive, Net Entertainment has fully played on the excitement around the enigmatic life of Pablo Escobar. This slot game is gritty and has lots of chases around drugs and cash. In addition, there are women and guns. In other words, based on the extremely popular Netflix series, this slot game has a lot of drama and thrilling action. The central characters here are the many players from the Netflix series. It is set in the late 1970s and 1980s when the enigma and mysteries surrounding Pablo Escobar were at their peak. Though the characters are from real life and the story is inspired by actual events, the tone and tenor of this slot game has a rather retro look with a comic book style presentation.

Where can I play Narcos slot online?

Below an overview of certified Narcos slot casino sites! Get a big bonus to hit a big win! (All UK licensed casinos)

Visit Slots & Casinos or scroll down for more online casinos where you can play Narcos!

Graphics and Sound of the Narcos Slot

Because the theme is a crime, the Narcos slot has used lots of retro-looking graphics and animations. The music and audio effects used have the real-life touch of a thriller in the making. Even though any crime based series will have blood and killings, the developers of this slot game have toned down the gory details to minimal so as not to distract the players. For instance, instead of using real images of the characters, the creators of this game have used drawing style animations to reflect them. In other words, instead of photographs, the game has illustrations of the cast. Finally, the ambiance of the storyline, the dusty street in the background is reminiscent of the wild-west countryside. It perfectly matches the theme of this game crime and killings. In addition, the transition from daylight to night time action is smooth and realistic.

The Narcos slot falls in the medium variance category. And with a relatively good Return to Player Percentage, this slot game is alluring to punters. In addition to the 243 paylines, it offers a variety of special features to keep a player hooked in the hope of making decent returns on the wager. Apart from the Free Spin rounds and Walking Wilds, this game additionally has the Drive-in and the ‘Locked-Up’ features. Each of these special features promises a handsome reward.

The Drug Enforcement Agency badge is the Wild feature in this game. All other symbols are replaced by the Wild symbol. A Wild landing on one of the winning symbols triggers this feature. Above all, the Wilds shift one place to the left each time they are triggered. In other words, they always remain on the reel. The Walking Wilds can appear during either the main game or during the Free Spin rounds.

Narcos gifts the Free Spins feature when a player lands 3 or more car-free spin symbols on reels 1, 3, and 5. Such a landing will give the player 10 Free Spins and in turn on each free spin, a higher symbol has the scope to transform to a Wild symbol. The Free Spins are also rewarded if a Walking Wild symbol is present on the reels, in case the Free Spins tally reaches 0.

This is one of the most attractive Bonus features and can be triggered at any time during the game. For instance, a car full of smugglers will drive through firing randomly and if one of the shots hit a high-value symbol, it gets transformed into a Wild. In other words, the chance of a bigger payout increases for the player when this feature is triggered.

In this feature, the role of the central character of the game becomes crucial. In other words, here 3 or more Pablo Escobar images appear simultaneously on the same row and each Escobar image gives a return in a multiplication ranging from 1 to 10 on the bet placed. This can also result in a ‘Golden Locked-Up’ feature wherein the returns could be as high as 26 times the punt placed.

What are the Narcos Slot RTP & Variance?

RTP is the abbreviation of Return to Player. The Narcos slot RTP is 96.23%. A considerably good RTP when compared to other slots in this genre. So what does this Narcos Slot RTP mean?The Return to Player Percentage is the return a player makes on a bet of 100, calculated as average over a period of time. In other words, if a player bets 100 coins, he is likely to get 96.23 coins back.

The Variance is Medium to High. This means less frequent combinations. However, if players manage to hit a high ranking combination they usually pay out big. 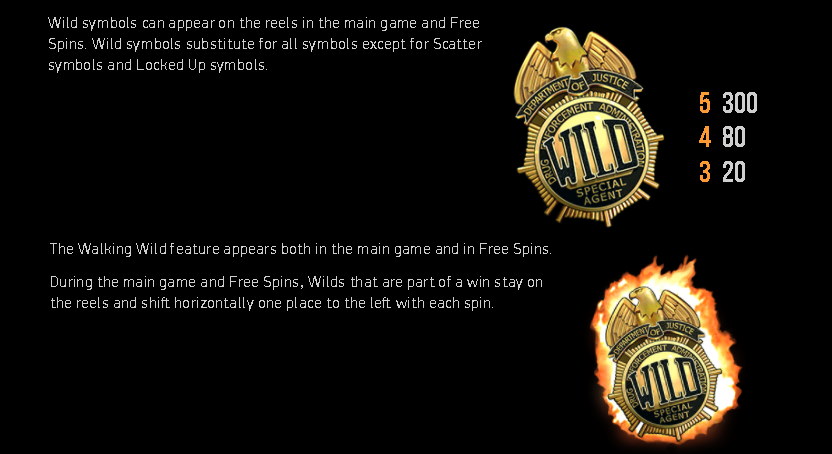 Strategy to Win the Narcos Slot

There are 243 ways you can win in this slot. Play with strategy and patience, and you could make a huge winning on your bet.

Like in all slot games, try the Free Mode version before you start playing with real money. This will help you get accustomed to the machine and see if it is friendly to you.

Always study the frequency of returns this slot game is giving. This will require patience. In other words, don’t be in a rush to place bets and make money.

●      Aim for the Special Feature Rounds

The Narcos slot offers many lucrative special features. Aim for them in order to win big on your bets.

Final Verdict on the Narcos Slot

In conclusion, you don’t have to be a fan of the Netflix award-winning series, Narcos to fall in love with this game. The Narcos slot on its own has enough thrills and action to lure in players of all kinds. In addition, there are many special features to entice punters. Finally, the high-quality illustrations and Latino music make it a winner among its peers. In other words, while it is entertaining, it also comes with the potential for big wins with a Narcos Slot RTP of 96.23%.

Pros and Cons of the Narcos Slot

1.    Is the Narcos Slot Game Based on the Netflix Series, Narcos?

Yes, the game has been inspired by the award-winning web series.

2.    Are the Characters in Narcos Slot from the Web Series?

Yes, all the characters in the web series have been recreated here.

3.    Does the Narcos Slot have a Mobile Version?

Yes, the Narcos slot has a mobile version available.

The Narcos slot RTP has been theoretically estimated at 96.23 percent. We at Play Real Money Slots advice players to play online casino slots with an RTP value higher than 96 percent.

5.    How Many Paylines are There in the Narcos Slot?

There are 243 paylines in the Narcos slot.

6.    What is the Variance Level of the Narcos Slot?

The Narcos slot has a medium to high variance level.

7.    Does the Narcos Slot have a Jackpot Feature?

Yes, the Narcos slot has a Jackpot feature with a 300-time return on the wager.

8.    Does the Narcos Slot have a Progressive Jackpot Feature?

No, the Narcos slot does not have a Progressive Jackpot feature.

There are 10 main symbols in the Narcos Slot Paytable. Furthermore, there is a Scatter, Wild & Locked Up symbol. Three Scatters or Locked Up symbols are required for either 10 Free Spins or the Locked Up Feature. The Wild together with the two DEA agents are the highest paying symbols. Obtaining 5 of these payout 300x. There are 243 pay ways.